Pillars of our Work in Health Promotion

As leaders in health promotion and primary prevention of health, WHISE builds upon and uses the evidence base on social determinants of health (in accordance with the World Health Organisation) and understand in our planning and our practice that unequal power, status across genders are a root cause for the inequalities faced by women and girls –across their lives.

In their charter for the 2019 Federal Election, the Australian Women’s Health Network laid the clear foundations for a focus on women and their health:

Health outcomes and experiences for women (and men) continue to be profoundly shaped by sex (biological) and gender (social) and often reflect broader gender inequalities in society. Gender inequality and the imbalance of power in relationships impacts on social, emotional, economic and health outcomes for women.
- (Australian Women’s Health Network, 2019)

The concept of intersectionality is about being attentive to the way in which “systems of inequality interlock to create conditions for either health equity or health inequalities” (Lopez & Gadsden, December 5, 2016). Taking an intersectional lens on health from a women’s perspective, “helps us understand that every (woman’s) experience is fundamentally different that the experience of others, based on their unique identify and structural positions within systems of inequality and structural impediments” (Lopez & Gadsen, 2016).

An intersectional approach… starts with diversity instead of commonality. Such an understanding may be arrived at by bringing the voices and experiences of marginalized women to the centre of analysis, rather than positioning them at the margins to be defined by their ‘difference from’ the universalized centre. - (A Murdolo and R Quiazon in Chen, 2017)

Gender inequality in the workplace

As of November 2018, Australia’s national gender pay gap stands at 14.1%, with women in full-time work earning on average $239.80 less per week than men (Workplace Gender Equality Agency, 2018). Over the last 20 years, the gender pay gap has ranged between 14.9 in 2004 and 18.5 in 2014. The pay gap starts from the time women enter the workforce. Contributing factors include: hiring and pay discrimination, female-dominated sectors attracting lower wages, women’s disproportionate share of unpaid caring and domestic work, limited workplace flexibility to accommodate women’s non-work responsibilities, and women’s greater time out of the workforce impacting career progression (Workplace Gender Equality Agency, 2018). The gender pay gap, combined with women’s higher likelihood of part-time work, impacts on their lifetime economic security and health.

Throughout the SMR, similar findings are observed. As can be seen from the chart below, females bear the burden of unpaid domestic work across all ten LGA’s, highlighting the gendered nature of caring/domestic responsibilities.

Gender disparities are consistently seen across Australian workplaces, such as the disparity between men and women in leadership roles. This perpetuates existing stereotypes about the role of women, both at work and in wider society, and exacerbates gender pay inequality (WHV, 20196). While women in leadership does not provide a solution for gender inequality, women’s increased representation contributes to gender equality, which is a key determinant for women’s health.

Prevention of Violence against Women

The link between gender inequality and health outcomes is clearly demonstrated in the prevalence of violence against women.

One in three Australian women will experience physical violence and one in five women over the age of 15 will experience sexual violence at some stage in their lifetime. Violence against women includes psychological, economic, emotional, physical and sexual violence and is the leading preventable contributor to death, disability and illness in Victorian women aged 15 – 44 years. It compounds existing socioeconomic disadvantage that may result in homelessness, and has significant effects on the mental health of those affected.

Gender disparities are consistently seen across Australian workplaces, such as the disparity between men and women in leadership roles. This perpetuates existing stereotypes about the role of women, both at work and in wider society, and exacerbates gender pay inequality (WHV, 20196). While women in leadership does not provide a solution for gender inequality, women’s increased representation contributes to gender equality, which is a key determinant for women’s health.

The rates recorded over the last twelve months are particularly concerning. Research suggests that these higher rates of family violence have been significantly impacted by COVID-19 restrictions – especially in Victoria.

The impact of COVID-19 on family violence rates

A recent study conducted by Monash University found that significant increases and challenges had been seen by practitioners responding to family violence calls. The study found:

Significantly, as can be seen from the chart above, a majority of LGAs across the SMR saw noteworthy increases in the family violence incident rate between 2019 and 2020 (year ending June).  The LGA’s of Stonnington and Glen Eira in particular saw increases above 20%, while Mornington Peninsula, Frankston and Greater Dandenong saw increases of 16%, 15% and 14% respectively. The SMR as a whole saw an increase of 11% which is considerably higher than the state average of 5%. Bayside was the only LGA to record a decrease in the rate, albeit of only 1%.

These increases are concerning and highlight the need for continued support and primary prevention across the region.

Females across Casey, Frankston and Greater Dandenong express more significant concerns about safety.  Six out of the 10 municipalities within the region scored below the state average of in both 2011 and 2015. In contrast, females in the municipalities of Bayside (71.8%), Port Phillip (71.9%), Mornington Peninsula (67.8%) and Stonnington (69%) scored higher when answering the same question.

Stalking and Harassment in the SMR

Attitudes to violence against women

Amongst some of its encouraging results, the survey reveals that:

Despite these encouraging results, there continues to be concerning attitudes, including:

Further, almost two in five (37%) young Australians agree that women make up or exaggerate claims of violence to secure advantage in custody battles, with young men (49%) nearly twice as likely to agree than young women (26%). The proportion agreeing with this statement has dropped by 15 percentage points since 2013Attitudes toward violence against women and gender equality among people from non-English speaking countries.

Through a mapping of SRH services in the region in 2018, WHISE found that women lacked information and access to contraception.  A rise in pregnancy testing was found by a number of organisations providing this service. Twenty-five per cent of respondents identified an increase in pregnancy testing over the previous year.

Have you identified an increase or decrease in the following needs from your clients of the past year?

It was also found that the most ‘popular’ form of contraception from organisations providing this service was condoms. Out of those organisations that provide contraception, 82.5% provided condoms in contrast to other forms of contraception.  This statistic may explain the rise in pregnancy testing sought, particularly when rates for Implanon insertion remained low. 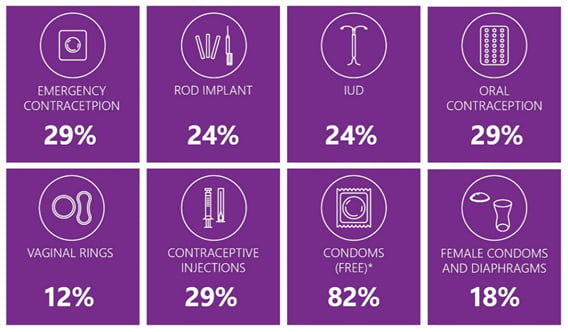 Within the SMR, we can see that uptake rates for the contraceptive Implant are consistently low. Data from the Women’s Health Atlas reveal that several LGA’s are below the state average, while the LGA’s of Cardinia, Casey, Frankston, and Bayside, to a lesser degree, have higher rates of contraceptive implant use.

Intra Uterine Device (IUD) insertion is variable throughout the SMR. Greater Dandenong has the lowest rate in the SMR, as the chart below reveals.  We can see that this has been the case from 2016 to 2018.  Interestingly, the uptake of the contraceptive IUD across the SMR has also steadily been increasing from 2016 to 2018.

Low uptake of Long Acting Reversible Contraception (LARC) remains a significant barrier to women’s SRH.  While condoms remain a very popular form of contraception, rises in pregnancy testing indicate challenges in relation to the types of contraception women might have access to.

WHISE has identified a number of issues of unmet service provision or requiring attention. It was found that 59% of organisations who responded to WHISE 2018 Service Mapping research stated that they were unable to appropriately provide SRH services for specific unmet needs.  Some of their concerns included:

These practitioners and service providers further outlined various reasons for their inability to adequately respond to specific needs in their service provision.  These included:

Throughout Australia, high levels of STIs continue to occur.  There is often misinformation or misunderstanding about the impact or health consequences of STIs

Low participation in cervical screening (formerly known as Pap Screening) is found in Cardinia, Casey, Frankston and Greater Dandenong.  These four municipalities are below the state average of 60% participation with Frankston having only 54% participation rate.

Several LGAs have low HPV immunisation rates for 14 year-old females. The vaccine has been shown to reduce cervical cancer and remains an important aspect of SRH.  Despite this, several LGAs within the SMR have lower rates of HPV vaccination.  Cardinia, Casey, and Greater Dandenong reveal a lower coverage, particularly in relation to Dose 3 of the vaccination. It is important for all three doses to be administered as this ensures full protection against HPV-related cancers